18901 products in our department store

18901 products in our department store 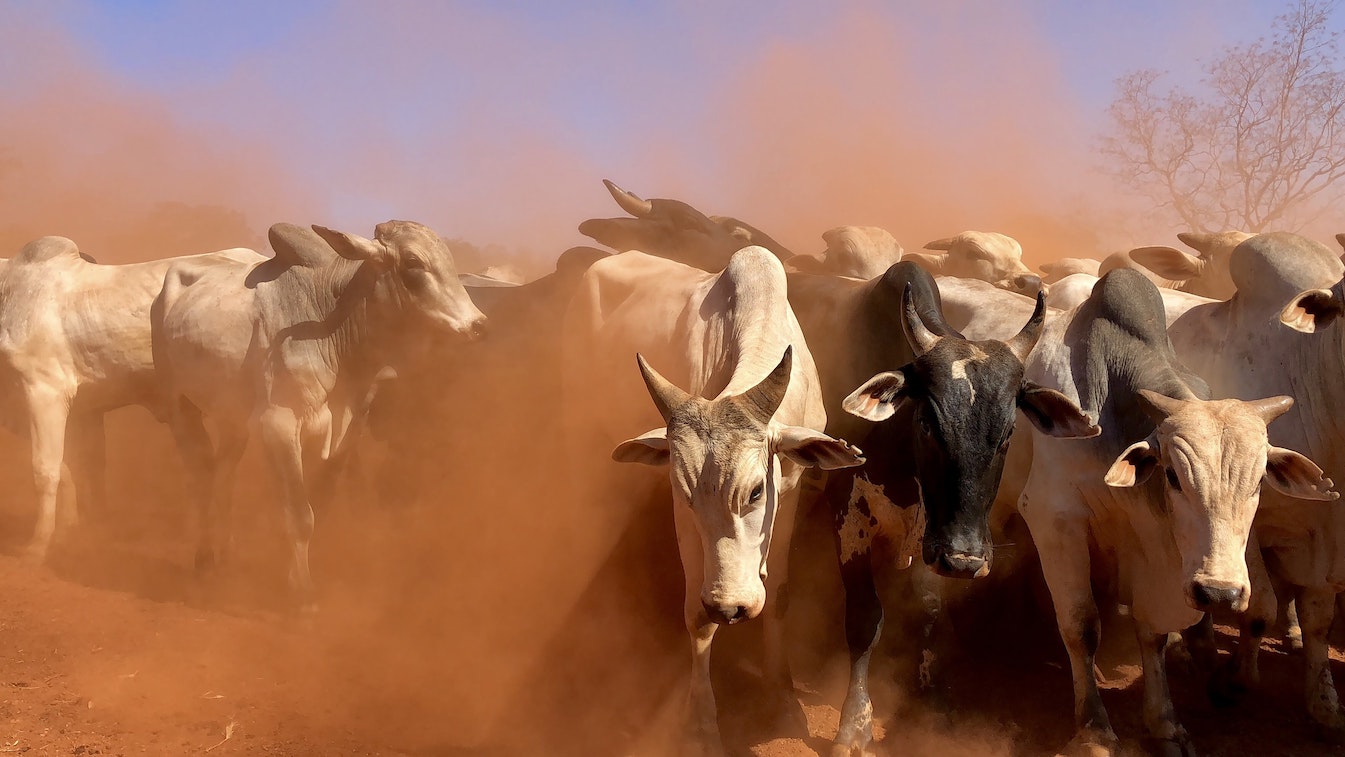 What is leather? How is it cruel, you may be asking? The short answer is that the snazzy biker look you like has a dark past. At the end of the day, leather is the skin of a once living animal. The human need to be fashionable and fit in with trends has meant that innocent animals, but also people and our earth suffer.

For the animals, people and the planet, your leather jacket carries with it a rather brutal reality. Just because it might look innocent, it doesn’t mean it is. In the time it has taken you to read these first few sentences, worldwide 300 cows, 1.459 pigs, 1.178 rabbits and 61.490 chickens have been killed by the animal industry.1 And that fact is not all that scared the crap out of us. 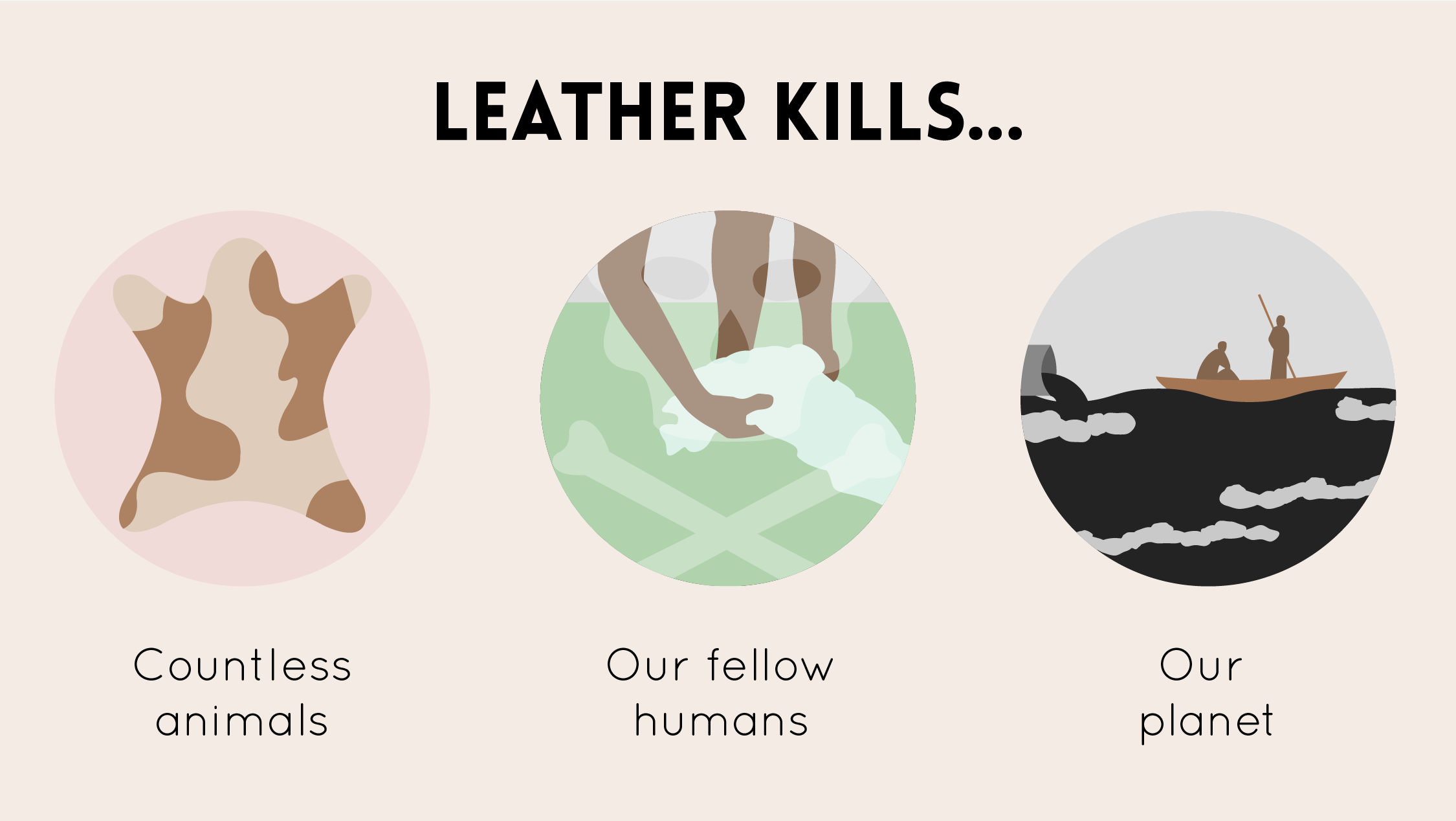 Leather is something that we have largely come to accept as a fact of life. We see it everywhere; on belts, bags, cars and even furniture. In marketplaces today, leather is often deceptively labelled ‘eco-friendly’, in the use of a byproduct.

But its manufacturing is in itself energy intensive, inefficient and involves the use of harsh chemicals without even considering the damaging, unethical animal agricultural process from which it emerges.

The sources that were used to write this article can be found at the bottom of this page.

The use of chemicals is extreme and unregulated in leather tanning. To prevent the decomposition of skin, aggressive chemicals like chromium are used to preserve it and make it unrecognizable from its origins.

These chemicals flow largely untreated around tanneries. This creates a combination of reactions that are incredibly damaging to the human bodies working there and the surrounding environment. Early deaths from cancer and skin diseases and dramatic skin bleaching are very real consequences.

Find out more about the poisonous chemicals used in leather.

By means of scraping the skin clean of hair, fat and flesh – as gross as it sounds – ‘tanning’ is essentially the process of preserving animal skin by applying harsh chemical pastes and acids. Not a way we usually think of animals right?

The leather industry is an important cog in the machine of animal cruelty. Animals are born, fed, impregnated, drugged, their babies torn away from them and killed in a lifetime cut unnaturally short... All for humans to wear their skin and eat their flesh.

Leather often doesn’t look like the skin of an innocent animal anymore. We contribute to this disconnection from the natural world by trying to hide the often horrific reality of what actually happens behind closed doors.

But there is no need for this cruelty and there are fantastic animal-free leather alternatives on the market now that are practically identical.

Find out more about what leather means for animals »

In his recent Oscar acceptance speech, Joaquin Phoenix reflected on how we have become disconnected from the natural world and how our egocentric worldview makes us feel entitled to the ‘products’ that animals can provide us. In this world, he spotlights the need for us to be a voice for (what he calls) the voiceless.

Continue reading the article below this video.

A constant river of tannery waste flows through areas of high leather exports. Alongside toxic chemical flows, the offcuts of the processed animal skin block the area''s waterways and the stench of rotting flesh can be smelled consistently throughout the nearby homes.

Not only this, but industrial-scale animal agriculture releases enormous amounts of methane gas per animal, contributing to greenhouse gas emissions to an even higher degree than fracking.

Additionally, the amounts of food and water that are used throughout the years to raise the animals could be otherwise re-directed to people in efforts to combat world hunger.

But this is just a snapshot of how bad leather can be. In this article, we’ll delve into the realities of leather manufacturing and what it truly means for the animals, the planet and the humans involved.

Find out more about how leather harms our environment.

The Ethics of Leather? There Are None.

From every angle - the animal, the human and the environment - leather production invisibly exploits and takes advantage. What we cannot see does not happen, or so the saying goes. Leather, amongst other modern industries by its very nature as a capitalistic enterprise, is always looking for the shortcut.

Humans enslave, mass-farm and kill animals for efficiency and profit. Leather businesses in the Western world benefit from weak labour laws and take advantage of being able to employ cheap labour in the East. Low pay, low safety standards and child labour are oftentimes completely invisible in the leather industry

Most extensive of all perhaps is the player that can’t protest, raise a voice or fight at all, our planet. By means of exploitation, inequality and blindness, the leather industry profits from an unethical system at every angle.

With this article we are going to shine a harsh spotlight on the cruelty behind leather and prove that it’s completely avoidable in the 21st century. As Phoenix reflects on in his speech, in terms of change: 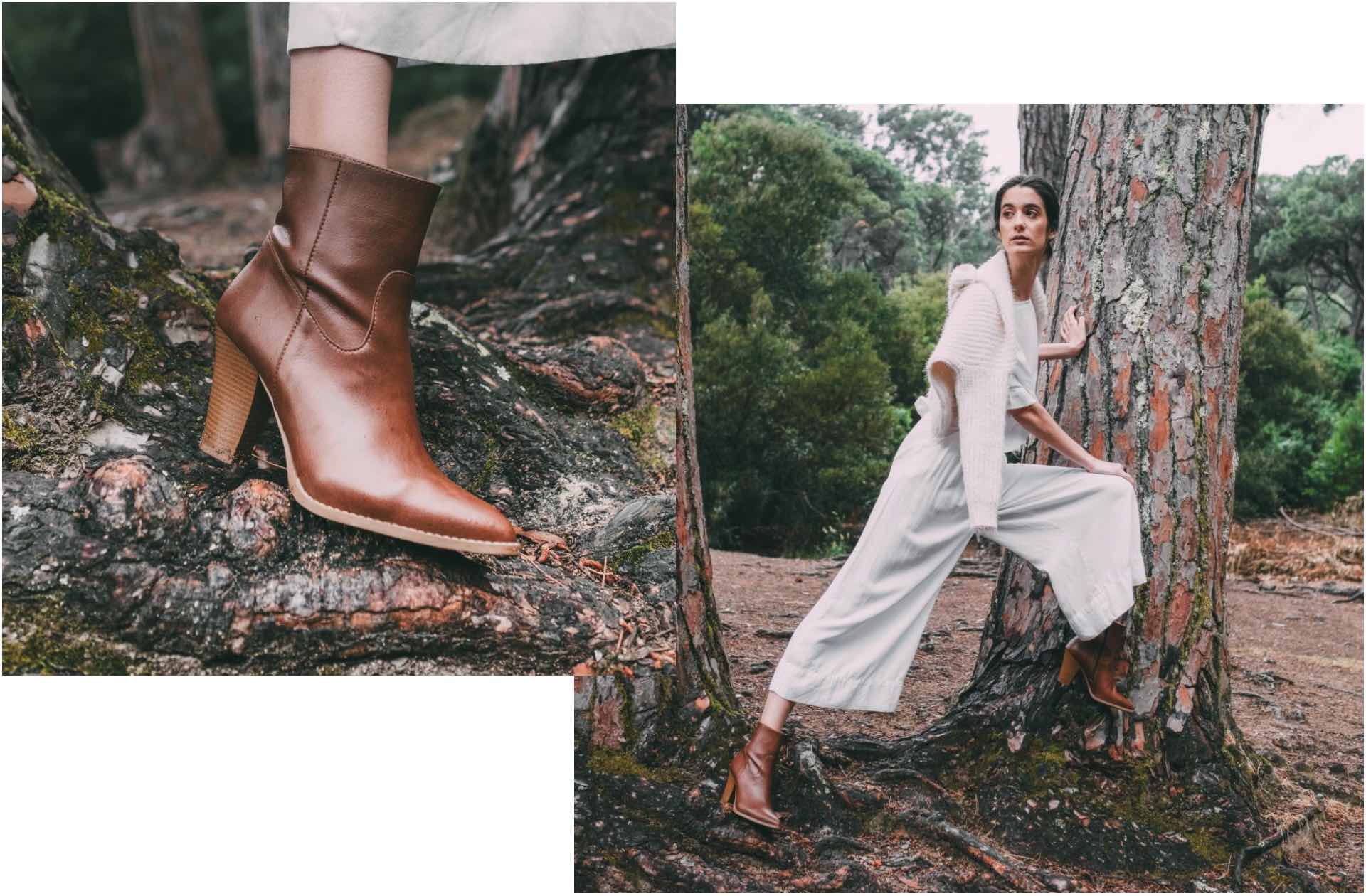 15. The Toxic Price of Leather

Shop the Look: Got No Beef

Toothbrushing: from bamboo to The Buddha